Between Tokyo and Beijing

An interview with Yukihito Tabata 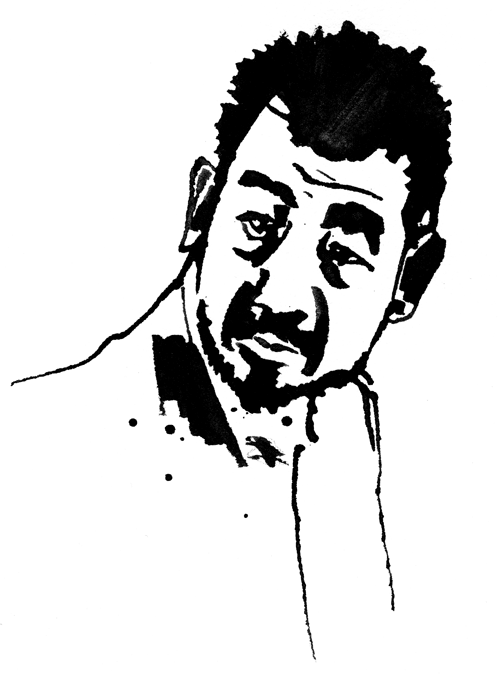 Born in Tokyo in 1950. After graduating from the Department of Art in the Faculty of Humanities at Wako University in 1973, he started working at Tokyo Gallery the following year. He focuses on promoting artistic exchange between Japan, Korea and China. In October 2002 he opened Beijing Tokyo Art Projects in the Dashanzi area of Beijing.

What was it that started off your interest in Chinese contemporary art?

YTMy father had been handling Asian art — primarily Korean contemporary art — since the 1970s. At that time China was in the middle of the Cultural Revolution, so it was impossible to go there. My father died in 1988, and I continued to concentrate on Korean contemporary art, but in the middle of the 1980s a lot of Chinese students had started coming to Japan to study at universities. Since Tokyo Gallery was handling Asian art, we got to know some of these Chinese artists who were based in Japan, and we started holding exhibitions of their work. One day in February 1989, one of them told me that there was going to be the first exhibition of Chinese contemporary art at a Chinese art museum, and invited me to come and see it. Of course I was interested in Western art, but Chinese art was more fascinating to me: it was still a work in progress. It was a little behind Western and Japanese art, but it had a lot of power, and so I started to bring Chinese artists to Tokyo to introduce to the Japanese audience.

How does Chinese and Japanese contemporary art differ?

YTTo put it very simply, it comes down to the degree of foreign influence. Japan has had a great deal of external influence. For example, in the Meiji Period, all the Japanese painters moved to Paris to study at places like the Académie Julian, and then they brought their knowledge of Western painting back to Japan. Then, in the 1950s, American contemporary art came to Japan. Japan has for a long time had this ongoing contact with the West: we’ve gone through stages of European and then American influence to get to where we are today. On the other hand, China cultivated its contemporary art by itself: its postwar experience was that of the Cultural Revolution, meaning that it didn’t have the same connection with the West. Well, if you were to pick out some kind of foreign influence, I think you could say that German art has had an influence on Chinese contemporary art, but basically where China really differs from Japan is that it hasn’t had anything like the same amount of foreign influence.

What led you to open Beijing Tokyo Art Projects (BTAP)?

YTAround 1995, I started to want to open a gallery in China. There was a chance for me to open a gallery in Shanghai at that time, but Chinese contemporary art wasn’t fully appreciated, so I decided not to go ahead with it. Nevertheless, I still wanted to do something there. I had been friends for a long time with Huang Rui, a Chinese artist based in Japan. From time to time he would go back to Beijing and he said he wanted to open a studio there. We thought that if we could find a good location, then he could open a studio and I could open a gallery ... well, it wasn’t so much a gallery that I wanted but more of an art space where we could make interesting projects happen. Then Huang Rui found these empty factory spaces in the Dashanzi area of Beijing, which everyone now knows as the 798 district. As you can imagine, when I first went to see that space with him I was intrigued by it. This big Bauhaus-style factory was screaming for contemporary art to be installed in it. Another appealing aspect was how cheap it was: to get a space that big for such little rent was like getting it for free. Even with all the costs of refurbishment put together it was really cheap. To have opened a gallery in the United States or Europe would have been incredibly difficult, whereas setting up a gallery or ‘space’ in China was remarkably cheap.

As a Japanese person opening an art space in China, were there any political obstacles that you had to overcome?

YTThere were limitations, in that it was very hard to open any kind of ‘gallery’ with the stated aim of doing business there. So that’s why we used the term ‘art projects’ instead of ‘gallery’ in the name. We wanted people to focus on the idea of us providing a collaborative space for people to work in rather than one designed for selling.

What are the fundamental differences between the Chinese and Japanese contemporary art scenes and markets?

YTThe fundamental difference again comes down to the fact that the Japanese are oriented towards Europe and the United States. When it comes to buying artwork, the Japanese have spent phenomenal amounts of money on the Impressionists and on contemporary art from the US — 12 billion yen on a Renoir or a Van Gogh, and so on. The Japanese like to spend big on Western art, and yet they don’t buy Japanese artwork. On the other hand, the Chinese don’t buy anything from the West and spend their money on Chinese artworks. You can say that the two countries are complete opposites in that way. The Chinese tend to think of their country as the best in the world, and as the source of novelty. However, Japan has been influenced by so many countries: Korea, China, Portugal, Spain, Holland, England and America. With all this foreign influence, the Japanese are now used to thinking of new things as coming from the outside.

Has the Chinese art boom had any effect on the Japanese market?

YTAbsolutely none at all. Japan is the only country to be isolating itself from the world market. The Japanese are still fixated on Europe and the United States, and yet the Europeans and Americans are all looking towards China! So Chinese artworks are steadily increasing in value, but this has had no influence on Japan whatsoever.

Do Japanese collectors go to China?

YTNot really. Maybe only about five percent of them.

Who are the primary collectors of Chinese contemporary art?

For the fifth anniversary exhibition held at BTAP, you showed the work of forty Asian artists. What kind of message is Tokyo Gallery + BTAP trying to send out about inter-Asian exchange and cooperation?

YTBeijing didn’t used to have anywhere for artists to show their work like this, so with BTAP we worked to improve this situation and also introduce their work to a Japanese audience. In the year that followed BTAP’s opening, a lot of galleries opened up in Beijing, and Chinese artists constantly held exhibitions. So I feel that my role and purpose now is to get Chinese artists to look at Japanese artists’ work and stimulate artistic exchange among Japanese, Chinese and Korean artists in Beijing. Asia is becoming more and more of a global presence in the 21st century. Put together, India, China, Korea and Japan have a vast land area and population, which is going to continue to produce outstanding talent. The only problem is whether or not these countries can improve their relations with each other. If they can, they will share a phenomenal power.

It’s not that Tokyo Gallery + BTAP won’t handle Western art, but as we have been handling Asian art since the 1970s, of course I have felt it my role to consider how to cultivate Asian art. Furthermore, China, Korea and Japan are still left with a legacy of problems from World War II, so I would like to do my best to help overcome these problems and make it easier for young artists to show their work. When Japanese, Korean and Chinese people actually meet and work together, they realize how much they have in common. If young Asian artists work together, I think they can help overcome regional differences.

Has commercial success affected the quality of Chinese artists’ work?

YTThe Chinese market is going to get bigger and bigger. It’s likely that the stronger China becomes economically, the more the art market will swell. The world is wondering when the Chinese contemporary art bubble will burst, but I still believe that it’s only in its early stages. There was the same feeling about Japan around the time of the 1964 Tokyo Olympics. Of course, there will be ups and downs, but looking at it for the long term, I think the Chinese art market is destined to grow. In Japan’s case, it was clear that when the yen went up in value, the quality of the artwork dropped. Money always ends up changing people. When artists are making money easily, then they make their work easily. When artists are poor, then they devote everything they have to selling their work and making more work. When I started to handle Chinese art in 1989, Chinese artists were putting everything they had into their work, and it was really interesting, whereas Japanese artists were producing theirs in the middle of the economic bubble, and it wasn’t of good quality. Now it’s completely the other way around: the Chinese art bubble has messed up a lot of the artists, whereas Japan has been in an economic slump and so artists here are all working hard. From the latter half of the 1980s to today, the situations in China and Japan have gone through a complete turn-around.

Do you think that more foreign collectors will show interest in Japan as a result?

YTYes, I do. The difference between good- and bad-quality works is clear for all to see. One the one side you have artists giving their life and soul to produce their work while on the other you have artists doing it purely for financial gain. It’s very easy to tell which are the good-quality works. So I’m pretty sure that Western collectors will show more and more interest in Japanese contemporary art.

Do you now find yourself less interested in Chinese art than you were before?

YTIt’s not that all Chinese contemporary art is now bad; there are still good Chinese artists. In particular there are a lot of good Chinese artists based in America and Europe, such as Cai Guo Qiang, Xu Bing and Huang Yong Ping. So I haven’t lost interest at all, but I do feel that I have come to the end of my role as a promoter of Chinese contemporary art. From now on I want to think about how to promote Japanese artists, get Western collectors to buy their work, and improve their situation. I want to focus on the least successful area of the Asian art world and inject new life into it.