I first saw Takashi Murakami’s art in the form of his sculpture called Hiropon: a wide-eyed girl-woman with massive breasts swinging a stream of lactating milk like a jump rope around her skipping body. The torso and legs were lean and athletic, the breasts comically huge. The milk looked nearly lethal—more a bondage device of rippled eaves than a stream of life-enhancing liquid.

Hiropon’s sparkly oversized eyes above a pert and tiny nose at first struck me as too self-consciously borrowed from anime cliché. But upon closer inspection, I realized why they were making me increasingly uneasy: blank white orbs of reflected light sat just off-center, adding a hint of Orphan Annie inscrutability to the colorful swaths surrounding them. Viewed from other angles, their vapidity could look menacing.

She was cute, even sexy by way of hyperbolic parody. But she was also, quite possibly, deranged.

I was new to Tokyo then, but discovering Hiropon in an otherwise unremarkable western suburb made perfect sense. Tokyo had already become for me a city in which stumbling upon the tantalizing amid the mundane had itself become commonplace.

A few days later, I learned that hiropon referred to amphetamines — in particular, the uppers consumed by Japanese laborers during Japan’s postwar reconstruction. The word was also a street name for heroin.

Murakami has since become well known internationally as a bridge between Japan’s contemporary pop culture imagery—largely via manga, anime and toys—and its contemporary art and fashion scenes—largely via ample commercial success in the former and rampant commercialism in the latter. He has also become something of an impresario, presenting contemporary Japanese artists to the global art market via Tokyo and New York, and offering provocative theories in order to both explain and brand them for consumption. That he has shrewdly and strategically positioned himself as such naturally arouses some criticism and probably more than a little resentment, but neither response seems to bother Murakami, whose recent self-portrait appears in the form of an overweight and sleepily self-satisfied statue called Oval Buddha.

Murakami originally called his production companies and teams of assistants in Tokyo and New York “Hiropon Factory”—a brazen and somewhat sly nod to Andy Warhol, for Murakami has his commerce-tweaking work reproduced not only for the high art market, as Warhol did, but also in the form of everyday products such as key chains, toys, figurines, T-shirts and posters. Now a formalized organization channeling the flow of money and art in and out of Japan, his Kaikai Kiki Co. has expanded dramatically overseas, recently moving from an old warehouse in Brooklyn into a larger and more functional space in Long Island City, Queens, and hiring several new staff members over the past few years.

“Takashi’s basic lament has always been that there is not much of an art market in Japan,” says Murakami’s New York publicist, Joshua Weeks. “[Kaikai Kiki] is in New York because it’s the center of the art world, not because it’s about Japan or Japaneseness.”

The Takashi Murakami who has been opening major shows in Los Angeles, New York and Europe is a seasoned businessman, unabashedly so. Newspapers gleefully call him “the artist as CEO,” and complaints arose from the usual suspects in 2003 when he accepted Luis Vuitton designer Marc Jacobs’s invitation to brand the company’s famous brown handbags with the smiling colorful flower icons of earlier Murakami paintings.

Murakami has also almost single-handedly opened Tokyo to the buyers, critics and fans of the global art circuit. With his own aesthetic whims as guidance, he selects and helps to cultivate the careers of Japanese artists such as Chiho Aoshima and Mr., both of whom now work in the newly constructed artists’ studio space in Queens. Through his GEISAI Art Fairs in Japan, Murakami hopes to open the Tokyo art world to the ambitions and achievements of the city’s native artists. “In the West, you [already] have your galleries and exhibitions,” Weeks adds. “But in Japan it’s much less rigidly defined. Takashi’s fairs are to stimulate buying and selling and to get young artists exposed. He’s trying to establish an art market for less established figures.”

So who is the real Takashi Murakami? A skillful huckster, spinning shallow art and consumerism into a capitalist enterprise and shoving it back at the West at inflated cost? A middle-aged, postmodern hipster with a native knack for blending high and low in the name of the now that rivals Madison Avenue’s brightest? Or a bit of both—plus a genuinely serious trained craftsman who is able to convey today’s Japan in all of its cartoonish identities and show the West what it wants to see therein?

Those of us who’ve lived and worked in Tokyo may see less reason to begin asking these questions or even raising debate, for Murakami is very much of and about the city in which he still spends most of his time. His oft-cited boilerplate theories—‘superflat’ as a culturally specific aesthetic style and ‘little boy’ as a culturally specific historical pathology—are better personified in the city of Tokyo than anywhere else in the world.

Superflat is hardly new, but it is handy — a single word to summon images of sleek computer monitors and flat-panel TV screens while suggesting a historical lineage of respectability and mystique. Japanese artists’ relative emphasis on the manipulation of the line, or the outline of shapes and forms, for effect over the shading techniques (classic chiaroscuro) of depth perception and perspective pursued by Western artists is an example of superflat that can be traced back to the emakimono picture scrolls of the 12th century. The Japanese have always seen and conveyed the world in this way, according to Murakami, and now, with our addictions to streaming Internet videos, computer games, cellphone and LCD screens, so do the rest of us.

When I was forced to describe the contrasting views of New York and Tokyo from above (an airplane porthole window) in my book Japanamerica, I used the following metaphors. New York, with its rising stone skyscrapers and falling avenue valleys in gridlike order, its shapely rivers and natural contours and stolid burnished lights, appeared to me as a jewel below, elegant and sturdy, clearly defined as it reached up toward you, beckoning calmly. Tokyo, by contrast, with endlessly circuitous patterns seeming to follow their own Byzantine logic, an uncertain relationship with the sea (an artificial island in the middle of the bay?) and red lights and neons blinking neurotically and sleeplessly seemed more like a computer chip, a tangled mass of somehow interlocking devices that never revealed a start or a finish yet continued to course on endlessly.

From above, New York is all about rising and falling, foreground and back, the space between the Empire State Building’s mighty spire and the broad dark magnificence of 5th Avenue at its side. Gazing down over Tokyo, I can rarely identify a single street, building or neighborhood. Instead there is the seemingly endless, and very flat, expanse of the urban.

As above, so below. Stroll down Broadway from upper Manhattan. Unless you’re a native, and thus too frenzied and focused to pause, you’ll be taking time out to view the balconies and turrets, the forceful thrust of buildings like the Flatiron, or the cavernous gaps of courtyards behind iron gates. Light and shadow blast you and lure you in.

In Tokyo, the casual visitor is awash in light. Buildings assert themselves, to be sure, surrounded by narrow alleyways that are barely visible in the glow. But it’s hard to notice them amid the action on the street — flashing signs inviting you to all-night izakayas (food and drink bars), karaoke bars, hostess clubs, fast-food counters and noodle shops. They envelop every train station, so where you are matters less than the fact that you are there. Wherever you alight in the city of Tokyo, this is what you expect — and this is what you get. Superflat.

Is it any wonder that Murakami greets us with the proliferating mushroom clouds of the only nation struck by nuclear bombs, that he sends us flowers of power with quizzically broad smiles, that his drugged up, dazed and giddily mindless Hiropon has vast breasts, mammoth milk—and an unnervingly aggressive desire to please?

Superflat is a clever word for an artistic approach that may well have been historically amenable to Japanese tastes. And Murakami may be at least partly right in suggesting that an accidental convergence is taking place in the 21st century, making manga, anime, fashion, high-and-low and East-and-West more blissfully confused and connected than before. To paraphrase the Vapors: Maybe we are, in this manner, “turning Japanese.”

Murakami’s “little boy” theory — that his nation has for sixty years learned to become servile to Western interests and developed the appropriate resentments and related irreverence — is a psychohistoric aesthetic of wounded pride and disfigured ambition.

To pursue, but not embrace, his positing of America, and the West, as big brother, I still think it’s helpful to look directly at Tokyo.

I have a personal stake in this vantage. My mother is Japanese. And while she was born in Tokyo, she was raised in northern Japan, first in the village of Esashi, later in the small city of Morioka.

If you visit either Esashi or Morioka today, you will find little of the combined deference to, worship and disenchantment with the West that colors Murakami’s vision. Despite enduring harsher economic conditions than those in Tokyo, local citizens in those communities act with sincere beneficence—and also a sincere sense of cultural differences. They don’t expect non-Japanese to behave like the Japanese do, hence they seem more provincial to the international traveler. At the same time, they don’t harbor the vindictiveness or self-loathing inherent to Murakami’s best work. They are neither buried in Western icons nor burdened by American soldiers. No wonder.

Little Boy makes most sense in Tokyo. Where else in the world would a capital city boast as its landmarks crude copies of other cities’ landmarks? Among the first: Tokyo Tower, a crass copy of Paris’s Eiffel Tower. In Odaiba, Tokyo’s high-tech artificial island: a crass replica of the Statue of Liberty. And in Shinjuku, heart of Japan’s domestic business class, a dark, featureless and nearly uninhabited telecom tower modeled on the Empire State Building.

None of these structures possess the grace and elegance of their more storied sources. But perhaps that’s the point.

Takashi Murakami then becomes a crucial artist because he is emblematic of Tokyo—a city that thrives on imitation and selfbetterment, and an Asian enclave of the new artists of our still newish century. His shrewd business sense and apparent nonchalence towards mass production seem to me emblematic of a city that needs to copy before it knows itself. His historical contexts are mostly accurate — but also beside the point. His position as an impresario is necessary. We all need bridges, great ones and poor ones, to get to where we’re going.

Roland Kelts is a half-Japanese American writer, editor and professor who divides his time between Tokyo and New York. He is the author of Japanamerica: How Japanese Pop Culture has Invaded the US, published in English and Japanese, a professor at the University of Tokyo and the University of Sacred Heart Tokyo, an editor of the New York-based literary journal, A Public Space, and a columnist for The Daily Yomiuri. His writing appears regularly in several publications in both the US and Japan. 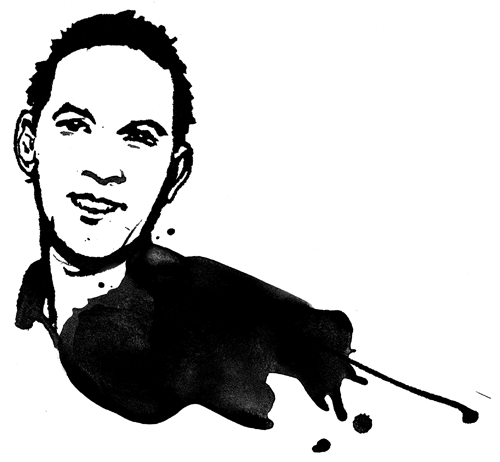