I liken Tokyo to a black hole. Having entered modernity with a gigantic explosion, it then started to collapse into a fascinating, fast-spinning, bulimic and invisible urban gravity that consumes and processes its surrounding realities: time, memory, cultural behaviors, TV programs, languages, fashion habits, architecture and much more. Contemporary art, a Western institution that has elicited global enthusiasm, is not immune. It too is sucked into the black hole of Tokyo along with many other spiritual and material realities.

After studying Japanese classical calligraphy for five years under Master Hideaki Nagano, I slowly came to ponder this phenomenon: while the practice of calligraphy comes from China, contemporary art comes from the West. If practicing calligraphy in Japan partly consists of copying the Chinese classics over and over in an effort to learn from the source, then contemporary art embodies a similar form of ‘copying’ of the Western modus operandi. What look like unknown paintings by Picasso can be found in suburban museums; they turn out to have been recently made by Japanese painters. Why would the art scene and museum structures be any different?

Perhaps because nothing exits a black hole, few galleries of international reach are found in Tokyo. Young, motivated Japanese artists soon find it easier to head elsewhere, leaving behind them a void in the cultural landscape. At a typical gallery opening in Tokyo, the vast majority of the crowd will consist of a number of designers and public-relations agents from the fashion industry—people who find in the art scene fertile ground for mingling their brand with the art halo.

In a similar fashion to the Cartier Foundation in Paris, Agnès b, Prada, Shiseido, Hermès and other fashion brands in Tokyo all boast art showrooms in their flagship stores. Here, dandies congregate around contemporary artworks sipping cherry-flavored champagne, but where are the insubordinate artists? These are the people we need to generate nonprofit venues and form a real scene. How does this colossal city develop its art scene without them?

By October 2007, Tokyo Art Beat tracked and listed 400 art events a month in Tokyo. Many of these events take place in hybrid spaces such as shops and department stores, design galleries and rental venues. On the other hand, the great many private and public museums in Tokyo are heavy, inflexible structures. In contrast to Shigeru Ban’s Nomadic Museum, a temporary structure of recyclable and reusable elements set up in Odaiba to house Gregory Colbert’s Ashes and Snow photography exhibition, conventional institutions remain relatively aloof to the mood of the urban Nipponese rhythm and the global shifting realities that frame it.

For better or worse, while Takashi Murakami’s Neo Pop “Disney on amphetamines”1 both learned from and usurped the urban culture dynamics of Tokyo with an eye to the outside world, the same can hardly be said about art institutions in this city, even though they could probably learn some tricks from the city’s dweebie-style psychedelic clubs, wireless Internet centers and pachinko parlors. If Murakami’s Mr. Dob is Mickey on steroids, I can’t wait to see a similarly techie museum structure that manages to connect the city drift with the architectonics of art display.

Tokyo offers many local gallery spaces that are tucked into residential areas and apartment buildings. They are at times generous and enthusiastic, but their sphere of influence is limited and tends to be disconnected from the outside world. Aside from these, there are the dozen or so internationally oriented Japanese commercial galleries that take part in international art fairs. These galleries are what they are, and show what they show, but there isn’t anything particularly engaging or visionary in their endeavors: there are hardly any political, ecological, educational or social messages detectable in the work that they promote.

Besides public initiatives like the clumsy Métro Musée of East Japan Railway Co. or the infamous Tokyo Wonder Site of Tokyo’s nationalist Governor Shintaro Ishihara, embassies, cultural institutes and exchange centers such as the Goethe and FrancoJapanese institutes serve as temporary art spaces. Venues such as these usually turn out to be the palliative solution to the lack of sharp and free-minded art venues in developing countries from Myanmar and Syria to Senegal, so their presence in Tokyo is another indication that something here is lacking.

Some organizations are proposing interesting solutions to this lack of flexible exhibition space. For example, in addition to its curatorial courses, Arts Initiative Tokyo has on several occasions held the 8 Hour Museum and 16 Hour Museum, a series of art events set up in temporary locations under the idea of a museum defined more by time than by space. CommandN’s Project Space Kandada also offers an alternative approach to exhibition goals. And there have been a number of biennial-type transdisciplinary events created through a process of direct interaction and communication from within urban realities, such as Jun Miyagi and Titus Spree’s Wanakio, a project in Okinawa that addresses the transformation of society and the urban environment triggered by globalization and the ubiquitous process of modernization.

As an artist living in the city for many years to research classical Japanese calligraphy, I clearly couldn’t avoid being anywhere but here. Consequently, my practice slowly adapted itself to the rules of Tokyo’s urban scheme: transience, impermanence, precariousness, networking, annexation, foreignness, wirelessness and adjustability. I came to understand that these were the walls and the ground on which my work would have to be shown in order to be both critical and pacesetting, and to some extent, I would argue that these are the true art spaces in Tokyo.

After using Buddhist temples, embassy swimming pools and cherry blossoms as exhibit spaces for site-specific, eclectic and barely categorizable installations, my latest attempt to draw on my knowledge of the city and make a critical consideration of its schemes was to develop an experimental, transitory and subversive art platform that I named Off the Record.

Tokyo has a number of locker systems that users can lock and unlock using a touch screen and their cellphone numbers as digital keys. In this initiative, the locker becomes a satire of the gallery space. The artist, publisher or member of a collective places an artwork or some other likely proposition into one of the dozen or so lockers selected for the event and passes the show on to the next person by choosing a number from their cellphone address book to enter as the combination code. This initiates a chain reaction guest list — a game of ‘Chinese whispers’ as it were.

While entirely hosted within public space, Off the Record nevertheless remains private and known only to invitees. As a show, it is designed to function as a parasite feeding off of more established exhibitions taking place in the city and is timed to share the same opening date. I invite some of the artists taking part in these shows, which in turn draws in other art-world figures.

The first occurrence of this ‘high-tech and low-life’ initiative took place in a Sega video game arcade in Shibuya in May 2006 simultaneously with the opening of Africa Remix at the Mori Art Museum,2 with such artists as Federico Herrero, Lara Baladi, Ahmad Nadalian, Ana Prvacki and Sue Williamson, and guest curators such as Simon Njami, Nathalie Anglès and Tran Luong taking part.

My concurrent hope was also to drive the art crowd to commingle with people typically disregarded by their community, such as Shibuya’s Lolita maid girls, cyberpunk mafia dandies and videogaming technopagans. In December 2007, the project occurred at Shimbashi subway station during the Pipilotti Rist solo exhibition at the Hara Museum of Contemporary Art. This time, the marginalized, alienated loners I wanted the art-goers to encounter were the Tokyo homeless.

The different levels of possible interactivity ranged from Lara Baladi’s piece being hijacked by art students who flooded the locker with their portfolios, to North Korean artist Soni Kum using the locker as a drop-off library where users would be able to consult photocopies of state-censored press materials and publications from both North Korea and Japan.

The displayed propositions and artworks are editable and entirely at the mercy of the viewer, who, usually alone with the piece, is able to alter it in any way he or she wishes before inviting the next person. This is similar to the Heian Period sequential collaborative tanka called renga (linked poem), a popular poetry form for many centuries. The initial proposition of the artist could hereby stand for the opening stanza of the renga chain, called the hokku, the forebear of modern haiku; the confined dimensions of the locker as an exhibit space tend to give proposed interventions a haikulike proportion.

Since I came to Japan to learn Japanese calligraphy, hoping to receive substantial influence from it, the Off the Record structure implicitly sent me back to the Lantingji Xu, the most famous work of calligraphy by Wang Xizhi, made in 353. This is how poems were composed during this legendary meeting at the Orchid Pavilion:

Wine cups were floated down a small winding creek as the calligraphers sat along its banks; whenever a cup stopped, the man closest to the cup was required to empty it and write a poem. In the end, twenty-six of the participants composed thirty-seven poems.3

The grove of the ancient past here becomes the Sega video game center or the subway station, while the meandering stream is the cellular circuitry or the rivulet of communication flowing between viewers. Opening a locker, one is metaphorically and tacitly required ‘to empty it and write a poem.’ While in the end feedback in the form of self-documentation is made by the user himself via cellphone snapshots sent by email and subsequently uploaded onto the project’s website. Like a delayed flash mob, participants in the project can mail whatever additional information they like to the next person they invite to the ‘exhibition.’ In theory, once started, this locker exhibition may continue indefinitely. It is said that there are only six degrees of separation between us and any other person on Earth.

Born in 1975 in Guelma, Algeria. He was educated in Cameroon, Belgium and Japan. He received his BA from the ERG in Brussels, his MA in traditional Japanese calligraphy from Gakugei University in Tokyo and his PhD in contemporary art from the Tokyo National University of Fine Arts and Music. He has been based in Tokyo since 2001. He has exhibited internationally and held artist residencies in New York, Jordan, Israel, Iran and China. You can read more about his work on transcri.be. 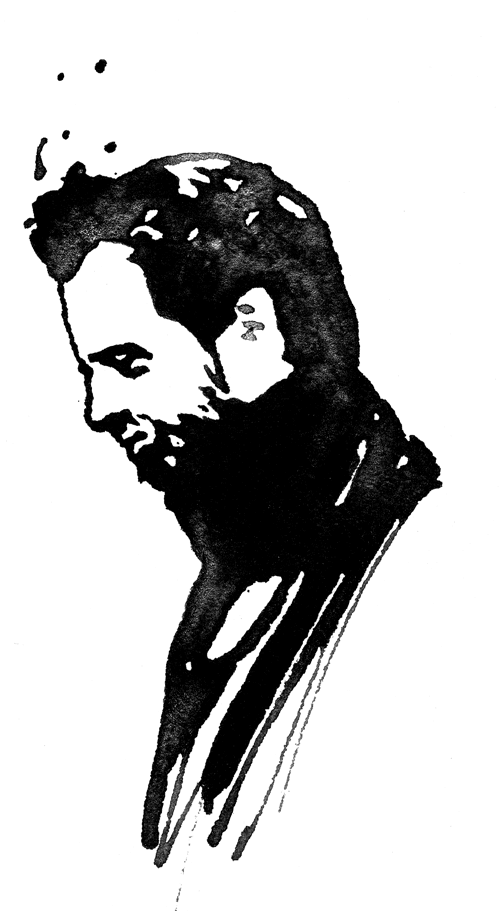